Just a quick note to translators: there is a unit test that you can use to check what strings remain to be translated. Make a copy of /test/pt_BR_TestTemp.php for your language and run it. This will list strings that are missing and strings that are no longer needed.

When reading a programming book, it can be tempting to skim the code examples. But they likely have some nuggets that are worth learning. The problem is that we don't like to read code written by other people - or at least it doesn't come naturally to us. What we need is a technique for rapid understanding of new code.

I propose reading the code aloud. Now, to make sure we don't get distracted by syntactic details, we can probably come up with some rules for what to omit.… Continue 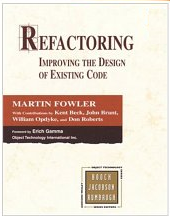 Martin Fowler's Refactoring (1999) is a landmark book for software engineering. It is a catalog of techniques for cleaning up code. Unfortunately, this remarkable book is tarnished by some frivolous names chosen for its list of "refactoring smells" (anti-patterns). Unlike the memorable pattern names from… Continue

FeedChopper: Turn any long document into a daily RSS feed

For the past day I have been building a new web service called FeedChopper. Basically you paste in a long web article or list of links or quotations, and it gives you an RSS feed that delivers one section (or link or quotation) each day to your feedreader.

IE 7 seemed to be faster than Firefox, so I decided to measure page-load times for the two browsers on four popular websites.

My test setup is shown below. None of the three browsers had any extensions installed. Page-load times were measured using IBM Page Detailer on my IBM T43 laptop with a wireless connection to a cable modem, in Victoria BC, Canada.…

Just wanted to share a style of code-indentation that I've found to express clearly the logic of if statements and other control structures inside template files. That is, when PHP and HTML are mixed together, this technique can make it much clearer what's going on (in terms of nested structures, such as if statements, for loops, etc.).

You simply indent with each level of nesting, regardless of which language you are in; for example:

This makes a… Continue

I have to put in a good word for the jEdit text editor again. Every so often I find some astonishing new feature in it (such as search-and-run-Java-expression-on).

Here's one that comes in useful for my current i18n project: Using the jEdit Highlight Plugin (and regular expressions) to highlight code that needs to be done (white), code already done (green), and code I don't need to concern myself with (dark blue).

You can color any text you want, specifying the criteria… Continue

Remember when you got your first computer? Modems were not a requirement in that day.

Then you got your first real PC. 14 kbps modems were alright, but for faster downloads from your city's BBS, you really needed a 56 kbps modem. And even with RAM at $50 / MB, it was worth the upgrade from 4 MB to 8 MB, even if it did hurt the wallet. Especially now that MS Word 6.0's come out. Word 2.0 is faster, but 6.0 looks so much better. Yeah, WordPerfect for DOS has a clever WYSIWYG interface,… Continue

Here's how to create a proper "constructor" in Javascript. Note that the confusing "new" operator is not required. Also "private variables" are implemented through the magic of closures.
Continue

Jon’s links of note: Versioning CSS files with PHP; An uploader for YouTube?; and an interesting drag-and-drop interface

Quote from my friend Doug on YouTube's upload-UI issues:

Noticeably absent from the list of Amazing Youtube Tools is an uploader tool. I would like to tag and title the video on my mac, maybe using spotlight or…

Joshua Bloch: How To Design A Good API & Why It Matters (video, 1 hour). Brian's also got a good list of API links that I'll be reading through next.