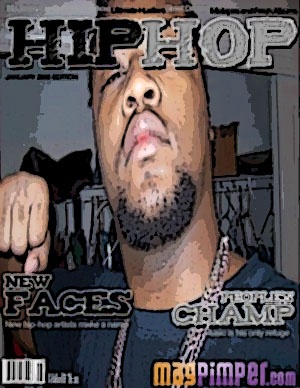 boss in the buildin

my name is kei-von andrews im from indianapolis indiana since i was in the first grade i knew that i had talent and to i started rapping and my family members loved it i hope you will love my music to im 18 years old now and im starting my own career the career that im starting is supreme clean grass cutting service and nap city productions onece my company gets bigger i will start putting my building around the united states of america this is how i started wanting to become a producer the way i became a producer was when i started making beats people started buying my beatz and they kept wanting more so i made more and put them on a website called soundclick.com then i realized that i cud be making more money than i was so i made a reverbnation.com page and im starting make money and my hustle is to make cds,beats,music,and sell stuff to get some pocket change since i dont have a job yet but i wish i did so i can save it up so i can get the homeless off the streets and to give them beter chance to live unlike there living right now struggling to live and begging people for money to eat and people getiing money for alcohol and to do drugs if you do drugs thats your problem an they shouldnt take it out on other people thats my argeument but some of my beats are like south beats and east coast beats they will make you nod and lean and my grass company i cut grass,lawn care,car washing services i started off with one customer itz slowly growing.
Why this name?
i chose this name because im young 18 and im a soulja struggling to make a living off a few bucks the reason i chose this name was because it was the first thing that came to my mind an i can relate to that name and the name that i chose first was deno but i had to change so i came up with soljamane223 a.k.a blood bath and i also chose the band name becuase i like to have a lot of diamonds on my neck in the future and diamonds on my wrist and have a grill and thatz one of the first names i came up with so thatz why i chose that name
Do you play live?
naw i dont play live yet i have websites with my music on there so if yaw want to here some of my music just goto my email adress up in i'll give yaw a sample of what i can do naw but i plan on doin it so i can get noticed but the only tyme i performed was at middle skool in front of my friends they like it i plan on posting my music on the net
How, do you think, does the internet (or mp3) change the music industry?
yup the internet is making music much more popular if it wasnt for the internet it would be hard to get our music out and there wouldnt be as much rappers that you see on the streets now because the internet came up and changed the way people do things the internet changes music by helping people get singed faster and get noticed by many major record companys and it helps people sell and distribute there music
Would you sign a record contract with a major label?
wat type a question iz that but hell yeah i wud like to still get signed to a major record company so i can make the same amount of money as all the other rappers make and i have dreams to become famous and to live the rich lifestyle one day yea id sign to a major record company so ican prove that if u work hard to acomplish a goll it will help u acheive more in life
Band History:
naw i aint got no histery yet but the only thing i did was rap when i was yunger when i was at my great grandmathers house and my grandmas old house and they thaught it was koo my
Your influences?
rappers rnb artist rockstar you name i have alot of influences if it wasnt for them i would jus be another boring kid in his room playing games all day or bored talkin to himself i dont do that im jus giving yaw sum examples of wat wud happep if we didnt have music
Favorite spot?
naptown florida kentucky those r some of the places ive been to but i woul like to travel the world and to see new things an new cities that i aint never seen before
Equipment used:
i use virtual dj,magix music maker 12, and garage band thatz about it
Anything else...?
naw jus hit yah boy up "nap city records on deck" http://www.reverbnation.com/label/napcityproductions
http://www.onstopshop.highpowersites.com/page/page/6602449.htm

MAKE SHURE U LEAVE A COMMENT WITH UR FEED BACK ALWAYS LOOKIN FOR WHAT THE PEEPS WANT SO IF U LEAVE UR THOUGHTS WE CAN BETTER OUR SERVICE TO THE SOUNDCLICK COMMUNITY HIT ME UP IF U HEAR SOMETIN U LIKE "nap city records on deck" https://www.youtube.com/2shortfresh http://soljamane223.sos4um.net/